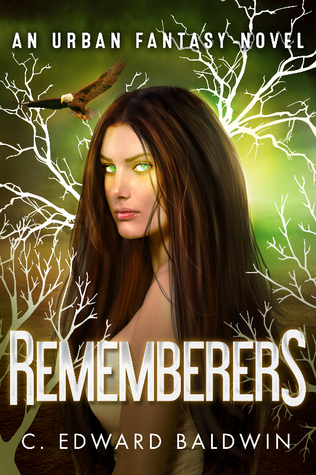 *I received the ebook version of this from a  giveaway  on LibraryThing.

Rememberers was not what I expected it to be. I  expected it to be more of the fantasy genre. Instead,  it's all about religion, science, psychology, terrorists,  demons, God, and Adam & Eve. We mainly follow  Kallie, a nineteen-year-old college student who  experiences daily feelings of deja vu, and who ends up  immersed in the world of religion and the evil that goes  with the good. She also ends up being of interest to  two catholic figures and an ICE agent. So obviously,  nothing is as it seems.

First though, I just want to say one thing about the  religion: I was often bored while reading the religion  parts. Mainly because much was repeated, but also  because it happened so often I just found myself  eager for that part to be over. And it's not like I have anything against religion; my grandparents are highly religious and strongly believe in God. But there was just so much of it. And I get that religion plays a huge part for the novel, but reading many things over and over again just in different words did not appeal to me. Other then that, though, Rememberers proved to be an interesting read.

I really like the idea behind the Rememberers and their powers. I especially love how there are past lives and they way that plays a part in the story. Reading about Kallie and seeing her perspectives change and her mind grow stronger was just so fascinating, especially because she can tear into those dang demons for three hours straight. I mean, it's action, and I love me some action. I also love how we got to go into minds other than Kallie's though, so we could make up our own theories about what these other people plan do to with her. I actually enjoyed reading about her interactions with certain people, because we readers know some of the characters she hangs out with don't have good intentions, and she herself doesn't know. So to see her try and piece it together, to see her friends piece it together, is interesting because we get to see how their minds work. All in all, I really like the writing and the way it all mapped out.

The characters (the religious figures, anyway) were not what I would have expected. It was good though. I think my favourite character would have to be Johnny Swag (because that last name, yo), because he's so dark and creepy and scarily brilliant. If he were a real person that I knew, I would probably be terrified of him, considering what he is capable of. And I know he wasn't in his right mind (if you've read Rememberers, you'll know what I'm taking about) but still, to be how he is and not see any wrong... It was just really fascinating to see him plan and take action.

I don't have much else to say. I would recommend this to those who don't mind religious talk, or books that are based on religion.